Black Friday Celebration starts today! Don’t miss the opportunity to get $250 worth of Any Gift Cards of your choice!

Receive up to $250 worth of Gift Cards by making a purchase as small as $80 of any brand and participating in the event. Choose from 1500 Gift Cards in over 50 countries!

And the prize pool is:

The Luckiest Seven get:

The Card brand you receive as a winner is the same as the one you bought during the event.

How to get on board: if your carts’ total value is more than $80 — congrats, you’re in the game! The more you buy, the more chances you have to receive the prize!

Visit the Gift Cards section via the 3-dot drop-down menu on the Balance tab.

Good luck and have a beautiful day!

Please be aware of possible temporary unavailability of operations with ETH in the wallet.

You may be experiencing problems with receiving confirmations for ETH & ERC-20 transactions.

Due to the general market turbulence, the Gas Price increased significantly on May 10, 2022 and continues to increase.

At the moment, Mycelium default Gas Price is much lower than the general market level shown in Ethereum Gas Tracker https://etherscan.io/gastracker.

Currently we are working on this issue and trying to resolve it as soon as possible. Meanwhile, if you need to send a new ETH or ERC-20 transaction or process a pending transaction, please install the application upgrade via the direct download link -> Mycelium 3.15.0

You will be able to set a custom Gas Limit and Gas Price and thus have full control over miner fee. We recommend using the Ethereum Gas Tracker to set the optimal price -> https://etherscan.io/gastracker

How to send a new ETH or ERC-20 transaction

For Gas Limit please use: 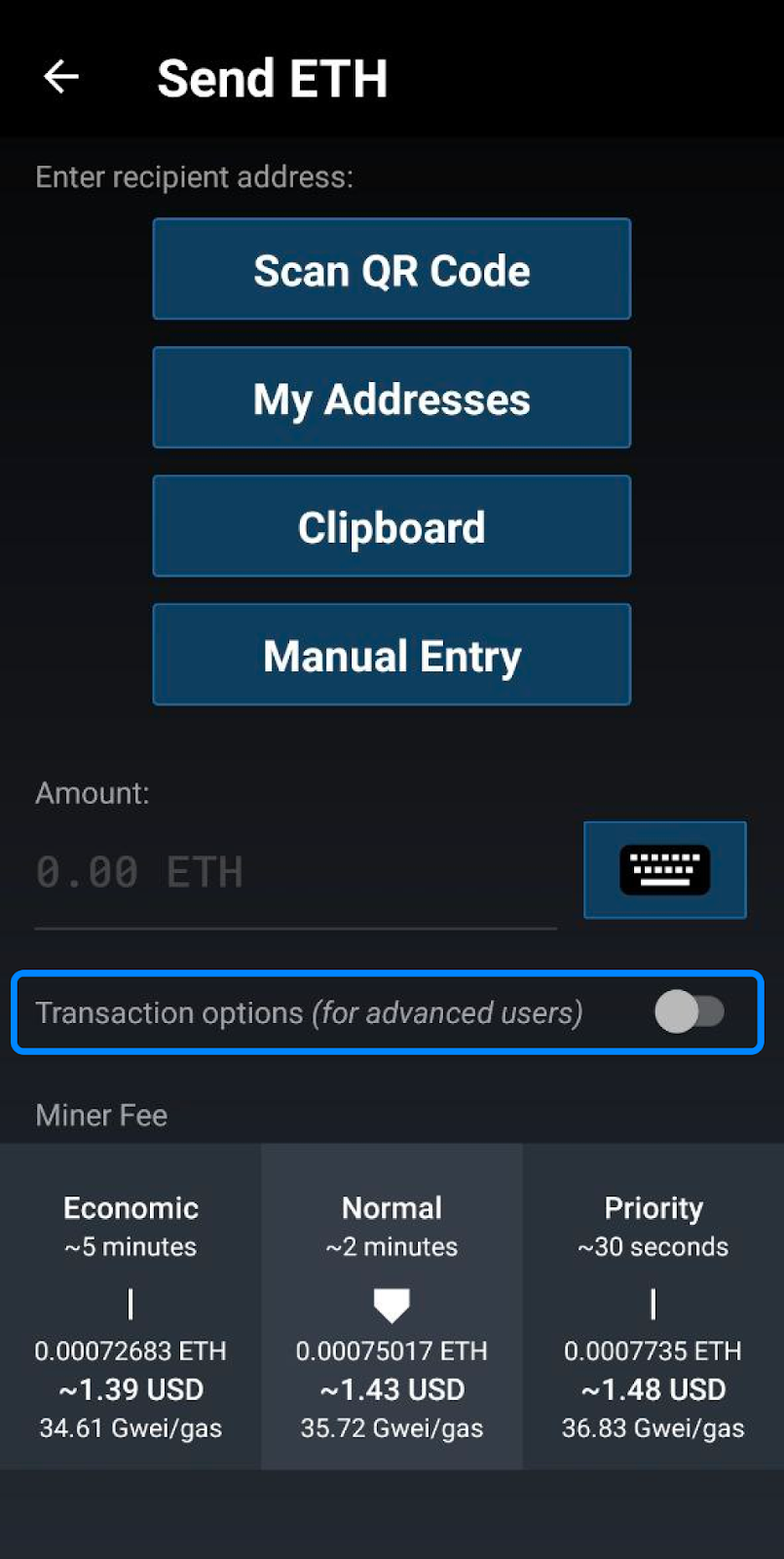 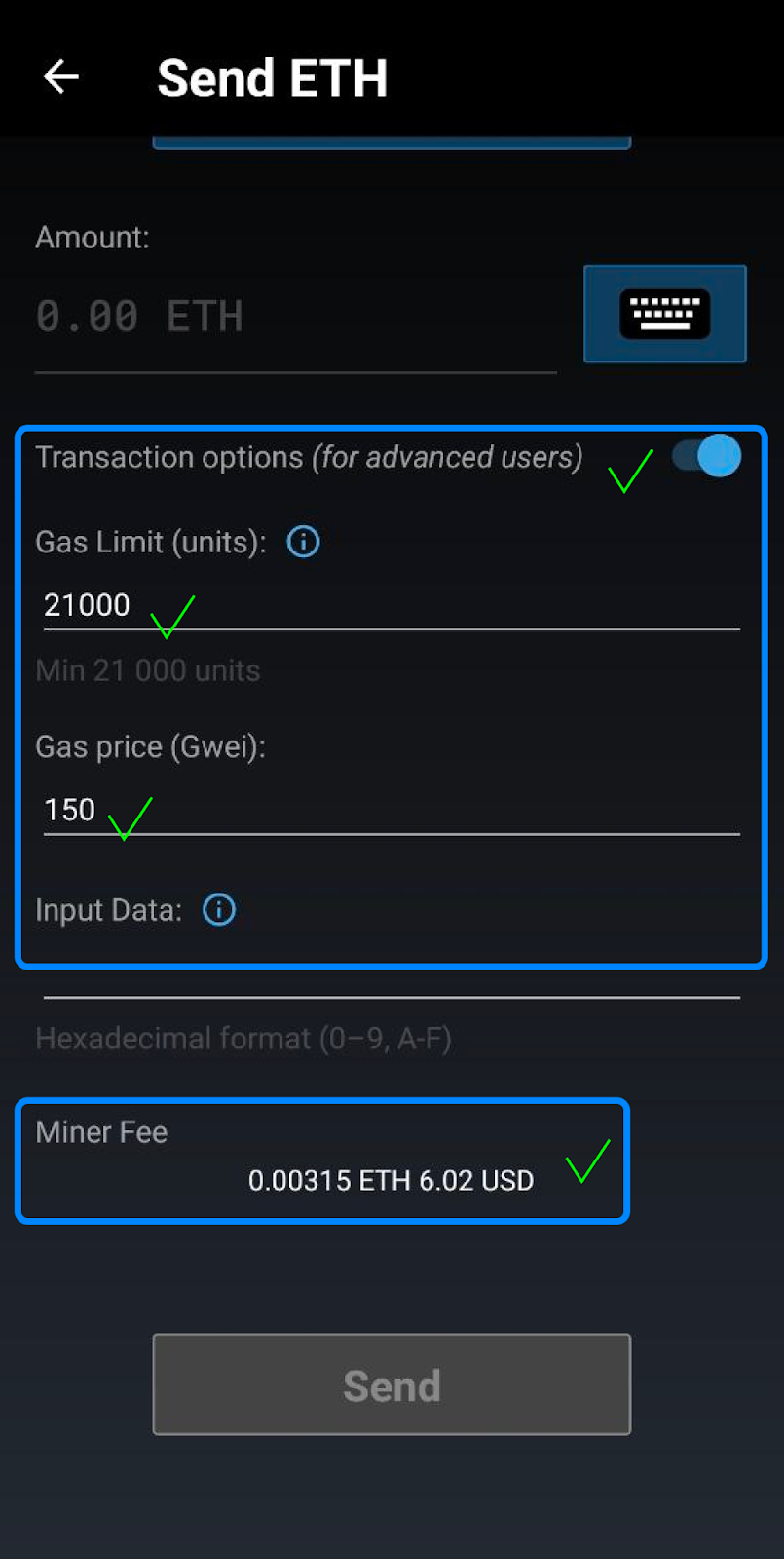 How to process pending ETH or ERC-20 transaction

1. In Transaction to be replaced with click and select pending transaction.

Thank you for your patience. We apologize for the inconvenience.

You may be experiencing problems with an outdated exchange rate in Mycelium Wallet. Please restart the application to fix this problem. We apologize for the inconvenience.

Our 2016 investment offering was strikingly different from what was universally practiced in the crypto industry at the time.

While the vast majority of tokens were structurally so-called “internal project money” (utility tokens), Mycelium tokens represented a registration of rights to receive company shares at the time of a liquidity event.

Whereas in most projects, a package put up for public sale determined a significant share of control over the project (often more than half), the package we sold corresponded to only five percent of the shares.

This approach was the result of a firm belief that the utility token model was flawed. Indeed, six years later, we see that only an extremely narrow layer of speculators has benefited from investments in tokens, and the vast majority of projects that conducted so-called ICOs at the time are now not active players in the market. And it’s important to note that the failure rate is at least two orders of magnitude higher than a traditional IPO.

All this time we have been continuously working to make the liquidity event happen. To put it simply, we were looking for the possibility of participation in the project not just of a big investor, but of a certain system-forming force, which would eventually become one of the equal players in the complete redistribution of the world finances. Let us remind that this very goal was postulated by the first evangelists of Bitcoin and other decentralized monetary and managerial systems.

Unfortunately or fortunately — it is too early to tell — the transformation of the global balance of power has been delayed compared to our initial expectations. But it is happening now. By the end of 2022, the world and its finances will be very different.

Naturally, in our official promotional brochures at the time, we did not think it appropriate to make such marginal statements. So our investors could only read a small part of our plans. In particular, we talked about changing the user interface and turning the app into a personal finance combine.

Now we can openly say that the essence of the plan was and still is to give the Mycelium community a chance to enter the new world (where there will be no old financial oligarchy or old tools) as full owners.

The fact that the pool of Mycelium token holders consists (for the most part) of early bitcoiners also carries a hidden meaning.

It is no secret that as the crypto industry has evolved, its ways have departed from the core philosophy and ideology of Bitcoin. Neither the movement’s followers nor its opponents were right. The latter, in particular, argued that the core of support would consist of common criminals who would use bitcoins and other cryptocurrencies instead of cash. However, the criminal component at the moment is elsewhere, from money laundering through NFT by quite systemic and “respectable” people to circumvention maneuvers to overcome the U.S. sanctions policy, which has lost all reasonableness and pragmatism.

Most importantly, no decentralization has occurred. Even bitcoin is now concentrated in the hands of a few, as a result of buying up, lobbying, and the natural concentration of mining in the hands of big traditional capital.

It has now become clear that those cryptocurrency players who colluded with the old oligopoly and turned the crypto industry into a Wall Street dependent unit were strategically wrong. For now, bitcoin’s price against the dollar is still an important indicator, and its correlation with the U.S. stock market is strongly positive (which in itself is absurd). But things are changing fast, and as the world moves to a multipolar system and divides into zones of different reserve currencies, the crypto industry will change just as fast.

We are incomparably better prepared for this scenario than our direct and indirect competitors, and therefore our token holders will remain at a strategic advantage.

The Festive Season Celebration starts today! Don’t miss the opportunity to get $250 worth of Amazon Gift Cards!

Receive up to $250 worth of Amazon Gift Cards by making a purchase as small as $80 of any brand and participating in the event.

From today till December 25, 2021, you have the opportunity to get up to $250 worth of Amazon Gift Cards. Six days, eight winners.
And the prize pool is:

The Luckiest Eight get:

How to get on board: if your carts’ total value is more than $80 — congrats, you’re in the game! The more you buy, the more chances you have to receive an Amazon Gift Card.

Have a beautiful day!

Just in Time for Black Friday and the Holiday Season

Great news everyone! We’re proud to announce the new in-app shopping feature, with support for purchasing thousands of different gift card brands with BTC and ETH directly from your Mycelium wallet: Gift cards.

As part of our continuous effort to enhance our service we have also launched a website (shop.mycelium.com) where over 70 different cryptocurrencies can be seamlessly exchanged for gift-cards. The huge library of participating brands spans across popular categories, like apparel, electronics, sporting goods, dining, books, games, entertainment, app stores, and even travel.

Some of us are less keen on waiting around for big brands to accept crypto, so we created the Mycelium Shop and do it for them. We believe this is a crucial step towards the widespread adoption by allowing some of the biggest names in retail to become readily available for crypto shopping.

With Black Friday and the holiday gift season right around the corner, our aim is to empower you, the user, to easily exchange some of your crypto’s value with purchasing power in real life shopping immediately.

VANCOUVER, BC, Aug. 24, 2020 /PRNewswire/ — Mycelium, creators of The Default Bitcoin Wallet, have partnered with BlocPal International, a leading global fintech and blockchain technology company, to strengthen their offering of crypto-fiat features in their next generation Mycelium Wallet. The upgraded wallet will provide consumers with more options to use their crypto to transact with traditional fiat banking and payment related services. The partnership will also provide Mycelium users in the USA and Canada with a Mycelium credit card which can be loaded from their Mycelium wallet balances. Mycelium credit cards are also planned to be rolled out later to users across Europe, the United Kingdom and South America.

Mycelium is one of the world’s most established blockchain brands. The Mycelium wallet launched in 2012 and is now one of the most widely used digital wallets on the planet. With over 2.2 million downloads on the Android and Apple app stores, the platform has an active user base of over 235,000 users facilitating over 10 thousand daily cryptocurrency transactions. According to Alexander Kuzmin, founder and CEO of Mycelium, “this strategic partnership with BlocPal helps us continue to scale as a global, consumer focused brand. By offering more options to use crypto together with traditional fiat payment transactions and bank cards, we are able to deliver a powerful, fully integrated experience to our users.”

BlocPal is a Vancouver-based, global fintech company providing first-of-class enterprise, blockchain-based technology to both consumers and enterprise customers. BlocPal provides customers with digital transaction solutions via API and customized white label services. An essential part of the Company’s platform is the BlocPal blockchain which securely manages both crypto and fiat transactions with Know-Your-Customer (KYC) verification to ensure regulatory compliance. “We are really excited to have Mycelium integrate BlocPal’s services into the Mycelium wallet,” said Nick Mellios, CEO of BlocPal. “Partnering with such a well respected brand is a great way to showcase our integrated fintech services for digital wallets. We are committed to helping the Mycelium team achieve its goals for future service levels and consumer adoption.”

The upgraded Mycelium wallet will allow users to create native BlocPal blockchain wallet addresses and deposit BTC, ETH, XRP, BCH, BSV, LTC and USDT to their wallet address to conduct instant transactions with each of these cryptocurrencies. Using the crypto funds deposited, users will be able to load their virtual and physical Mycelium credit cards for transactions with merchants around the world. Users will also be able to recharge airtime minutes with over 132 countries worldwide, make bill payments and pay with crypto instantly at any merchant participating in the BlocPal merchant network.

About BlocPal International Inc.
BlocPal’s vision is to provide the world a simple, fast, and secure digital transaction platform that allows anyone to transact in their currency or asset of choice. A leader in the emerging digital economy, BlocPal empowers consumers, merchants, and enterprise customers to participate now in this digital economy, which includes both fiat and cryptocurrencies. At the core of BlocPal’s service is its decentralized blockchain transaction technology, which enables any currency or asset to be digitally signed and traded while complying with established financial regulations.

A lot of community members store ERC-20 tokens these days. As Ethereum remains the most popular blockchain platform for smart contracts and DApps, Mycelium wallet now supports the standard.

Distribution of Android wallets: twice as many users rely on custodial and closed source wallets than on open source and verifiable wallet.

WalletScrutiny tries to answer these questions for Bitcoin wallets on Android.

Read about their methodology to understand in more detail or just see what we have to say about your wallet: